In todays world, the physical demand on this earth has become a potential environmental hazard. Deforestation, one of these physical demands, has been a growing problem for over the last several decades, especially in the Amazon rainforest. In the Amazon, trees are being cleared for numerous reasons: some get turned into toilet paper, timber for houses, as a fuel supply, the list of what we use wood for goes on and on. But although wood is essential for many of our human needs in todays world, it serves a far greater purpose than to be used as means to an anthropogenic end. The Amazon sequesters, or traps, 2 billions tons of carbon each year. All trees are important in this absorption process, most notably the temperate and tropical rain forests around the world.

Because of deforestation there are less trees to absorb man made and naturally occurring carbon. What exacerbates deforestation is when the slash and burn technique is implemented. This not only means less trees for absorbing CO2, but when trees die and/or burned they too release carbon dioxide in the air. So there is more CO2 being created and less being absorbed at the same time. 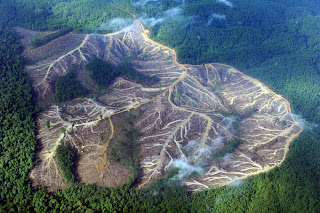 As i mentioned above, the biggest concern that comes with deforestation is that of balancing CO2 levels. But a plethora of other problems arise with deforestation. Without trees to protect the soil from erosional processes like wind and rain, the soil has been depleting. The end result of this erosional process is desertification; where the soil gets to the point that it is no longer fertile. Another problem arises in the form of the loss of natural habitats for the animals that live in these areas. The Amazon rainforest is home to one of the most diversified places on earth in terms of the number of different species living there. There may seem to be plenty of land still left in the Amazon covered by forests, but with less forest means less food for the animals. 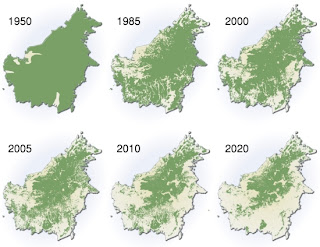 Why is deforestation happening? Places like the Amazon are being deforested so the land can be turned into large scale agriculture and also cattle raising. The soil of the rainforest is very rich and fertile, thus very ideal for crops, but only for a short time before the soil dries up. These crops don't compare at all in terms of carbon absorption. This large scale exploitation, if you will, of natural resources is done by more economically developed countries who, like the United States, are supplying the demands of an over consuming population. Small tribal groups in areas like central Africa who live in and around these forests, whose livelihoods depend on these forests, are at the mercy of those clearing the forests. In summation, the more developed countries are in demand of the resources in these forests, which comes at the expense of the less developed countries who cannot protect their natural resources.

Blogger#01001
I started this blog for Geography 361, Environmental Hazards, here at the University of Wisconsin - Eau Claire. I'll be finishing my junior year this May (2013). I'm still searching for my calling, if you will, in my field of geography. I love being outdoors and working in the field, but being able to create maps via Arc GIS is another interest of mine. 2012 was my first year really using the software, and I hope to incorporate Cartography into my career.